Service changes and updates IR offices, myIR and phone lines (SPK2IR) are unavailable until the morning of Thursday 28 October for planned system maintenance. Find out more

Resurgence Support Payment (RSP) You will not be able to apply for the RSP in myIR until the morning of Thursday 28 October. Businesses affected by the alert level increase that started on 17 August can apply in myIR from 28 October. Applications for a 4th payment round are planned to open on 29 October. Find out more

Resurgence Support Payment (RSP) The government has announced an increase to the amount and frequency of the RSP from 12 November. Find out more

The data for these statistics is available for download from the links at the bottom of the page.

Graph of Cash collection from Child Support from 2008 to 2017 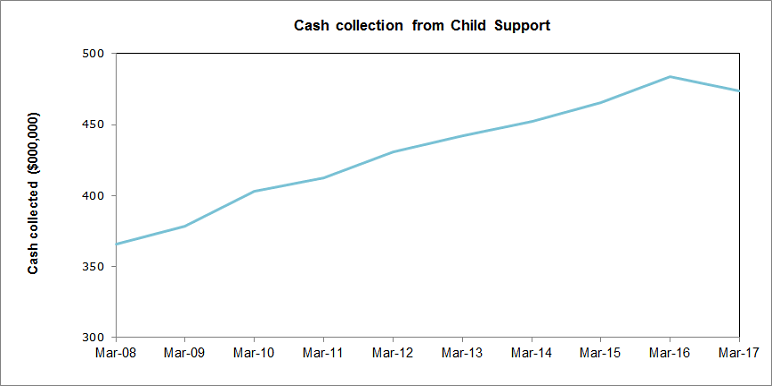 This graph has one line showing the value of cash collected from child support customers for the period 2008 to 2017.

Graph of number of child support customers from 2008 to 2017 This graph has two lines showing numbers of receiving carers and liable parents, from 2008 to 2017.